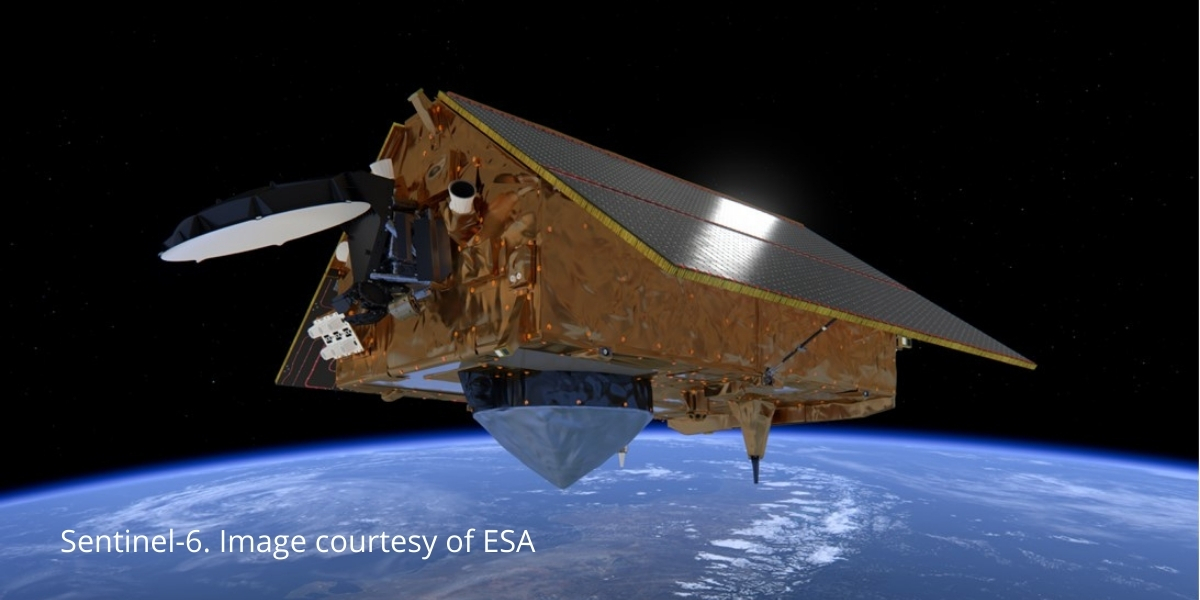 While we go about our daily lives, high above us in Low Earth Orbit (LEO) a satellite roams, providing vital evidence of changes that are affecting every one of us.

Rakon products are on-board the Copernicus satellite Sentinel-6 Michael Freilich (‘Sentinel-6’). The satellite was launched on 21 November and sent back its first measurements of sea level last week. The mission has been made possible through the EU’s Copernicus Programme and its partners1.
Sentinel-6 is involved in the ongoing work of measuring sea-surface height from space, thus contributing to an improved understanding of climate change. The satellite continues the work of prior satellites2 which have been involved in measuring increases in sea level since the first major oceanographic research satellite was launched almost 30 years ago.

Rakon CEO Brent Robinson says the company has a long involvement with prior missions.

“Rakon has been providing components since the TOPEX/Poseidon3 mission back in 1992 and in previous Jason and Sentinel missions. We are proud to continue to play our part in enabling the critical work of key space agencies to monitor ocean level change, a consequence of climate change which impacts marine ecosystems, threatens the submerging of low-lying coastal regions and affects our weather.”

Robinson says three of Rakon’s components, designed and manufactured in France, are on-board the mission.

“Sentinel-6 includes an integrated Oven Controlled Crystal Oscillator (OCXO) and a newly qualified Crystal Oscillator (XO) supplied by Rakon. These components are used in the Global Navigation Satellite System (GNSS) receiver. The OCXO is used as a timing reference and the XO provides the clock signal for a FPGA4 in the on-board computer, which is part of the receiver.

“The company’s world-leading Ultra Stable Oscillator (USO) is also part of the DORIS5 instrument which is giving an extremely precise orbit determination to the LEO satellite due to its unparalleled short term stability.”

General Manager of Rakon France, Pierre Poulain says Sentinel-6 is a next generation satellite with advanced technology on-board, allowing measurements to a higher level of accuracy than has ever been achieved in the past.

“For example the precision of the altimeter has been improved from a few cm to within the cm. Rakon’s USO, developed by our team here in France has enabled ESA and its partners to measure a sea-level increase of eight cm during the past 30 years.”

“We are delighted to be contributing to the Copernicus Sentinel-6 satellite mission which is the maiden flight for the third-generation of our USO and which has improved the accuracy of the altimeter by an order of magnitude and has seen its weight and volume reduced by two-thirds.”

He said Rakon has delivered more than 70 pieces of the equipment for more than three decades for the altimetry and the USO is now being used in other space applications like the study of gravitational waves and deep space communication.

Sea level is continuing to rise at an increasing rate.Ocean level measurement from space will continue into a fourth decade with Sentinel-6B; Sentinel-6’s twin satellite, scheduled to launch in 2025.

-Footnotes-
1. Partners include ESA, NASA, NOAA, EUMETSAT and CNES.
2. Key partners in prior missions have included ESA, NASA, CNES and NOAA.
3. TOPEX/Poseidon (‘Topography Experiment’/Poseidon).
4. FPGA stands for ‘Field-Programmable Gate Array.’ It is an integrated circuit that can be configured by a customer after it is manufactured.
5. DORIS stands for ‘Doppler Orbitography and Radiopositioning Integrated by Satellite’. It is a French satellite system used for determining satellite orbits and for positioning.

About Rakon
Rakon is a global high technology company and a world leader in its field. The company designs and manufactures advanced frequency control and timing solutions that provide the heartbeat of much of today’s communications and positioning technology. Rakon was founded in Auckland in 1967 and is listed on the New Zealand stock exchange. For more information visit www.rakon.com
About Rakon’s Hi-Reliability Heritage
Copernicus Sentinel-6 mission
Rakon products designed for the mission included: OCXOs TE400/ RK407, XOs RK115/RK135 and USO RK410.

Rakon’s High-Reliability Solutions
Rakon has a long history of providing high-reliability products, with some customers having an association with Rakon for 40 years or more. Rakon is one of the world’s largest solutions providers of high reliability, frequency control products. Government and defense programmes across the globe use Rakon solutions in systems where high performance is required under the most demanding conditions.

Rakon has a broad space offering to meet the needs of the most demanding applications in the traditional space and NewSpace markets including ESCC qualified resonators, oscillators, Master Reference Oscillators, Frequency Generation Units and soon to be released communication equipment.